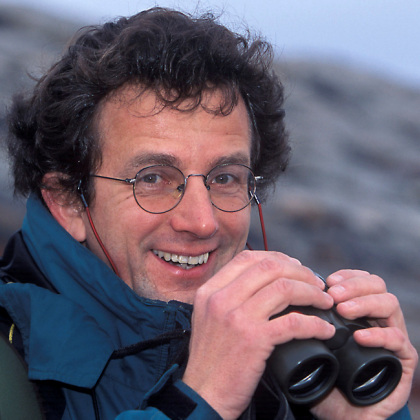 Swiss citizen Peter Balwin was born in Zurich in 1957 and has been travelling and hiking since his youth. After a two-year journey around the globe, he first came into contact with the Arctic in the 1980s in Alaska and later on a trekking tour on the west coast of Greenland. The polar virus has not let him go ever since. But it was only a boat trip to Spitsbergen in 1991 that opened up the fascinating world of the High Arctic, which he visited every summer between 1995 and 2012. Soon Peter Balwin gave up his “normal” profession and made the polar regions his new areas of work. Initially as a lecturer and tundra guide, but soon as expedition leader, Peter Balwin led 63 boat trips to the Arctic, mainly to Spitsbergen, Franz Josef Land as well as to East and West Greenland. Since 2000, he has commuted between the Arctic and Antarctic, where he has led 20 expedition cruises to the Antarctic Peninsula, South Georgia and the Falkland Islands. In this way, over 1800 landings in the north and south have been made during his “polar career”. In addition to his work on ships, Peter Balwin led hiking tours in the Swiss Alps as well as bird watching excursions. He regularly writes articles about polar wildlife and research and presented the polar regions on numerous occasions and lecture evenings.